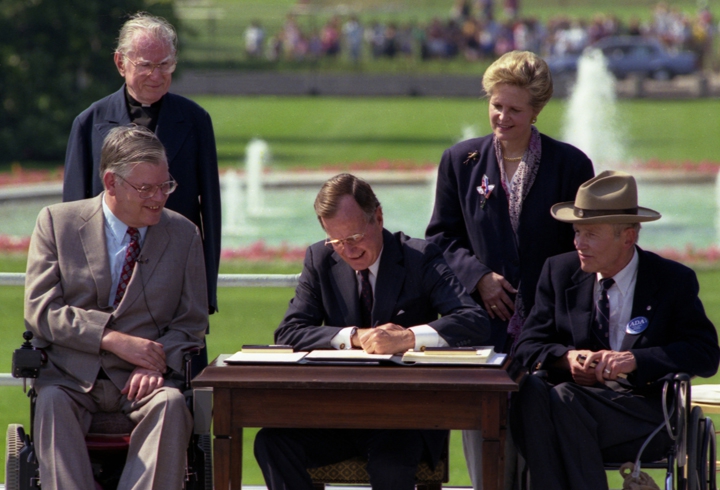 Early in December, our nation mourned the loss of George H.W. Bush, the 41st President of the United States. During and after his presidency, President Bush’s decisions and lasting impact have been fiercely debated. However, for anyone with a disability, the legacy of George H.W. Bush will be the signing of The Americans With Disabilities Act in 1990. Littman & Babiarz, disability lawyers in Syracuse, Ithaca and Elmira, New York, are pleased to have this vital piece of legislation for defending the rights of the disabled.

Lex Frieden was one of the architects of that legislation. He was paralyzed after a car accident and has since lived life in a wheelchair. Frieden says, “The ADA wasn’t about health. It was about civil rights.”

The Americans With Disabilities Act (ADA)

The Americans With Disabilities Act (ADA) became law in 1990. The ADA website explains, “The ADA is a civil rights law that prohibits discrimination against individuals with disabilities in all areas of public life, including jobs, schools, transportation, and all public and private places that are open to the general public.”

The purpose of the law is to ensure that people with all types of disabilities have the same rights and opportunities as everyone else, in both public and private life. The ADA is divided into five sections that each relate to important areas:

A Legacy Worth Remembering

In his concluding remarks before signing the ADA on July 26, 1990, President Bush stated, “And now I sign legislation which takes a sledgehammer to another wall, one which has for too many generations separated Americans with disabilities from the freedom they could glimpse, but not grasp. Once again, we rejoice as this barrier falls for claiming together, we will not accept, we will not excuse, we will not tolerate discrimination in America.” He ended with, “I now lift my pen to sign this Americans with Disabilities Act and say: Let the shameful wall of exclusion finally come tumbling down. God bless you all.”

During the activities honoring President George H.W. Bush in Washington, D.C., there were many people with various disabilities present. Without this pivotal legislation in place, most would have encountered significantly more difficulties even getting close to the President in order to pay their respects.

Americans with disabilities now enjoy more freedoms and opportunities than ever before, but at times, this access must be defended. Some cases where this may be necessary include:

Littman & Babiarz, Disability Attorneys in Auburn, New York, are pleased to represent people with all types of disabilities when their rights are threatened or violated. Call us at 607-277-7527 or contact us online to arrange your free consultation.